Moving water – waterfalls, rivers, streams and surf – often presents unique challenges to the landscape photographer. The most common way to capture images of moving water is to use a slower shutter speed. But how slow should the shutter speed be? The answer largely depends on the effect you are looking for in the final image.

I normally divide my approach to shooting moving water into these three desired effects:

The silky effect is generally a soft blur that contains some texture or threads of water. The milky effect shows no texture and the water is completely blurred. The textural effect is a mixture of the previous two. It conveys a sense of motion but contains more textural threads in the water. I could include stop motion as well, but it is not a water effect that I personally like.

There is always a debate among some photographers that the motion look, in its various forms, does not look natural – that the stop-motion look is more “realistic.” It is a silly argument at best that has no right or wrong answer. Moving water consists of millions of molecules in motion. The human eye never actually sees that, any more than we actually see the molecules frozen in mid-flow. For my own work I prefer the motion look, the sense of softness it creates and the contrasts in texture that come from blending the flow of water with solid objects. But it comes down to your preference as a photographer and your own personal vision.

But the question still remains. How slow or fast should the shutter speed be to effectively capture moving water? The answer largely depends on the water’s speed or flow rate. Other factors such as the environmental conditions, time of day and even the lens focal length also come into play. The following shutter times are typical for my moving water exposures, but are by no means set in stone:

So why are these times not set in stone? Because environmental conditions, time of day, lens focal length and the addition of filters all have an effect on the time. I do a lot of my water work in the early morning or early evening. The reason for this is that the light is lower in contrast. But foggy conditions and overcast skies are also great times to shoot water. These conditions generally extend the shooting times during the day past the golden hours. At these time frames, with lower ISO settings and apertures of f8 to f11, shutter times can start off beyond one second and approach 4 to 8 seconds. This is especially true in forested locations. And this is before a filter has been applied.

I will stop here briefly and say that in nearly all shooting conditions and times, I use, at the very least, a circular polarizer. This essential filter reduces specular highlights on water surfaces and wet surfaces on rocks and plants. A polarizer can lesson the amount of light striking the sensor between 1.3 (Singh-Ray polarizers) to 2 stops (most other polarizers). So if my starting exposure is one second, the addition of a polarizer can extend the shutter time to 2-4 seconds. A solid or variable neutral density filter will further lengthen shutter time. For example, if you use a 3-stop ND and a polarizer, that 1 second exposure extends to 30 seconds. Because I use set apertures from f8 to f11, to achieve an extended depth of field, my approach to the capture effect depends on how and when I stack my filters, and whether I need to alter the base ISO of the camera. Remember from the exposure triangle that any adjustment of ISO or aperture will affect shutter speed. Since my apertures are generally set I make my shutter speed adjustments by altering the ISO and filtering.

It may seem complicated but consider the following scenario. I have arrived in the early morning at a waterfall with a high flow rate. Through several test shots, at ISO 50 and with a polarizer, I have determined that any capture beyond 1/2 to 1 second will create a shot with the water rendered as a formless mass. What I need is a little texture. With a simple adjustment of the ISO to 400 I can shoot that waterfall at 1/8 of a second and add some much needed texture to the form of the water. This all comes down to some very simple decisions in the field. What are my conditions? What is the speed of the water? Is it moving fast, moderately or slow? And ultimately what do I want to achieve in the composition? From that starting point, set up your composition, and make a series of test shots and study the effect on the camera’s view screen. Is the shot going to look good with the milky effect or do you need some texture?

For all of my moving water work, I have some essential equipment. The first is a sturdy tripod. Often I am standing in the water and I need a solid base for the camera. My filter kit consists of a Singh-Ray 105mm circular polarizer, a Singh-Ray George Lepp 4×6 3-stop solid ND and a Singh-Ray Mor-Slo 5-stop solid ND. These are attached using my 15-year-old HiTech filter holders. I have various filter adapters to cover my lenses. I also use an 82mm Singh-Ray Vari-N-Duo that combines a polarizer with up to 8-stops of variable neutral density. Finally an electronic shutter release is a must.

I shoot completely on manual with my exposure setting on evaluative and set for ½-stop increments. For the most part I shoot brackets one stop apart, but there are times when a ½ stop is necessary. Since I use mirrorless cameras, I do not have to worry about mirror lock-up. But this is essential when shooting with other DSLRs to minimize shutter shake. I refer to the histogram during shooting to make sure I am not blowing out highlights or am so deep in shadows that recovery will be difficult. I am always looking to create a master file that contains all of the shadow and highlight detail. From there I can make decisions about the final image during processing. 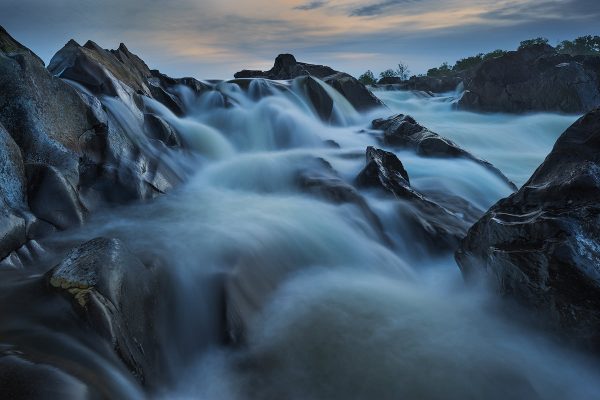 This image was made about 20 minutes before sunrise. The water was moving fast, but I determined early in the process that I wanted a soft, milky look, to contrast against the forms of the rocks. Additionally, I knew, given the sense of light, that I would process in bluer tones for a cooler look. The image was made with a Zeiss Distagon T, 25mm at ISO 50 at f11 for 4 seconds. I used a Singh-Ray 105mm polarizer to reduce specular highlights on the water and wet surfaces of the rocks. 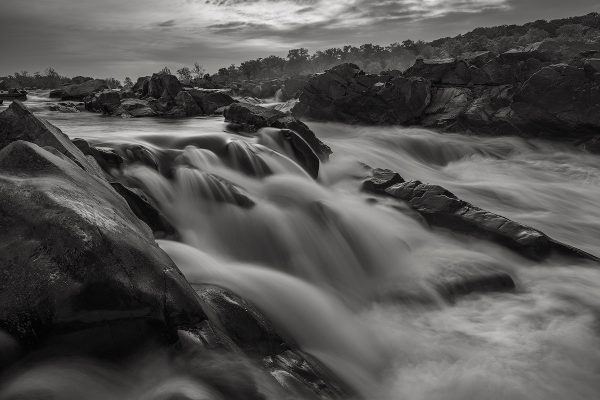 This image was made right at sunrise. Though clouds blocked the sun, the ambient light had increased by several stops from the previous image. For this shot I determined that I wanted to retain the sense of a milky look, but with some added texture. With an exposure of 1 to 1-1/2 seconds, I could retain the sense of the flow, but the plunge pool at the bottom required some texture to bring in some form to the water. To do this, I made a second image and increased the ISO to 100 to get a 1/2 second exposure. This was enough to retain some texture. The two files were processed separately in Lightroom and merged in Photoshop. The images were made with a Zeiss Distagon T, 21mm at ISO 50 at f11 for one second and ISO 100 at f11 for ½ second. I used a Singh-Ray 105mm Polarizer to reduce specular highlights on the water and wet surfaces of the rocks. 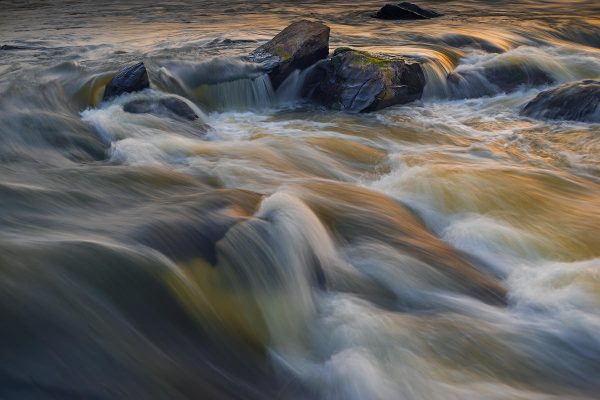 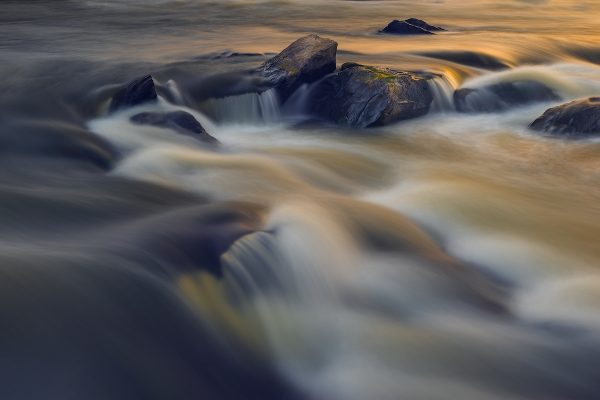 These two images show how a variance in shutter speed can lead to very different results. The water through here was moving at a moderate pace. There was also some beautiful reflected light coming from the rising sun and the far shoreline of the river. So the question became one of which look was I after. I could not decide so I made one with a milky effect and the other with more texture. Each I think has its merits, but in the final analysis I prefer the one with more texture. This is because I like the sense of lines in the flow created by the shorter exposure. The images were made with a Zeiss Contax G, 45mm at ISO 50 at f11 for ¼ of a second for the textured version, and ISO 50 at f11 for 6 seconds for the milky version. To easily achieve such a variance I used a Singh-Ray 82mm Vari-N-Duo filter. This filter allowed me to dial in polarization and vary my shutter speed by altering the amount of neutral density. 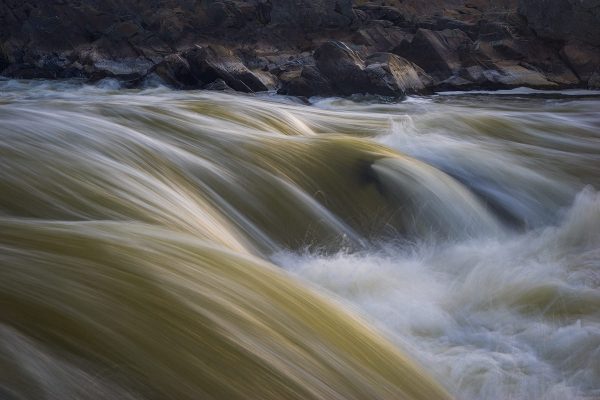 The water at this shot’s location was really moving fast. Shutter speeds of greater than one second and slower did not produce a pleasing image. After some experimentation, I determined that a shutter speed of ½ to ¼ of a second was optimal for retaining the powerful sense of the flow, but with added texture to give the water form and shape. This image was made with a Zeiss Contax G, 45mm at ISO 50 at f11 for ¼ of a second. I again used a Singh-Ray 82mm Vari-N-Duo. This filter allowed me to dial in polarization and vary my shutter speed by altering the amount of neutral density.