Editor’s note: Nye Simmons is a long-time Singh-Ray friend and author of Best of the Blue Ridge Parkway, written with Nye’s photographer’s eyes, with photographers in mind. This handy paperback tells you everything you need to know to help plan a visit and make the most of your time. And Nye is the photographer for Blue Ridge Parkway Celebration, a coffee table book of images, poetry and prose, illustrating the many photo possibilities along the Parkway’s 469 miles.

It had been a cloudy and somewhat breezy mid-October day, and I was looking for something that wasn’t a repeat of prior work. I find that in my old familiar haunts I often lapse into “same old – same old.” It’s always relaxing to be on the Blue Ridge Parkway, but I was looking for trophy images to top off a book project – and I needed a zinger. Noticing that there were occasional small breaks in the clouds (just cracks really), I knew that an opportunity might present itself, but you never know how it will unfold until the kaleidoscope reveals itself. Up high was the place to be, facing west. Cowee Overlook on the Parkway was to be the perfect place, and as we drove closer my pulse quickened.

Small stiletto beams of light started to develop here and there. As we arrived at the Overlook, the beams intensified as more breaks in the clouds revealed themselves. The beams began to march across the terrain below, and for several minutes the drama played itself out. I wanted a special composition, a panorama that was full of beams from edge to edge. Wait for it… wait for it…. then a row of beams started to develop and march across the horizon, reaching that “wall to wall” point that I wanted.

The rest was easy. I was already setup and composed, with my ND grad selected and placed. But more contrast than I thought. It was trial and error, backed up by experience. Experience had taught me that three stops of grad wasn’t enough in the strong backlight, so it was going to be either four or five. Four stops, to my surprise, allowed the highlights to blow out excessively, and I didn’t want hard moves to bring up the quarter tones, so five stops it was. My Singh-Ray custom-made five stop Galen Rowell grad was perfect for this scene. It would save a lot of time post-processing the image, and the landscape was perfect to minimize artifacts. 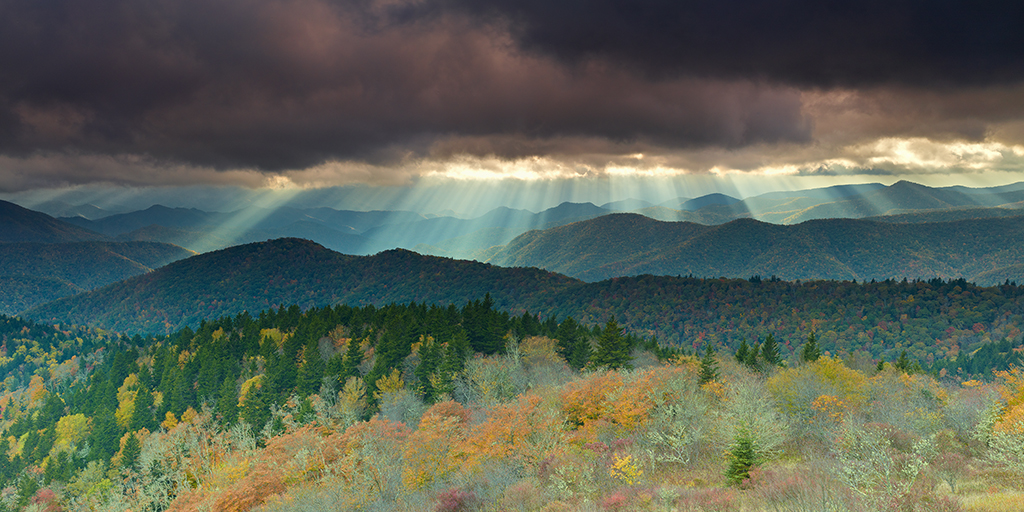 Sunbeams are strongest against a dark background, and it takes just the right configuration in the clouds, and angle of the sun above the horizon to create them. No two situations are the same. It helps to be up high and looking more across than up, but it’s not critical. In such situations I have been surprised at the strength needed in a grad to keep the highlights tamed.

A soft light day on the Parkway, here at Graveyard Fields in early May. The sarvis (serviceberry) were in full flower, and all that was required was to compose and wait for a lull in the wind. My Singh-Ray polarizer saves 2/3 of a stop, which allows either a faster shutter speed or a lower ISO, giving options to reduce noise or stop motion, whichever is most critical to the image. 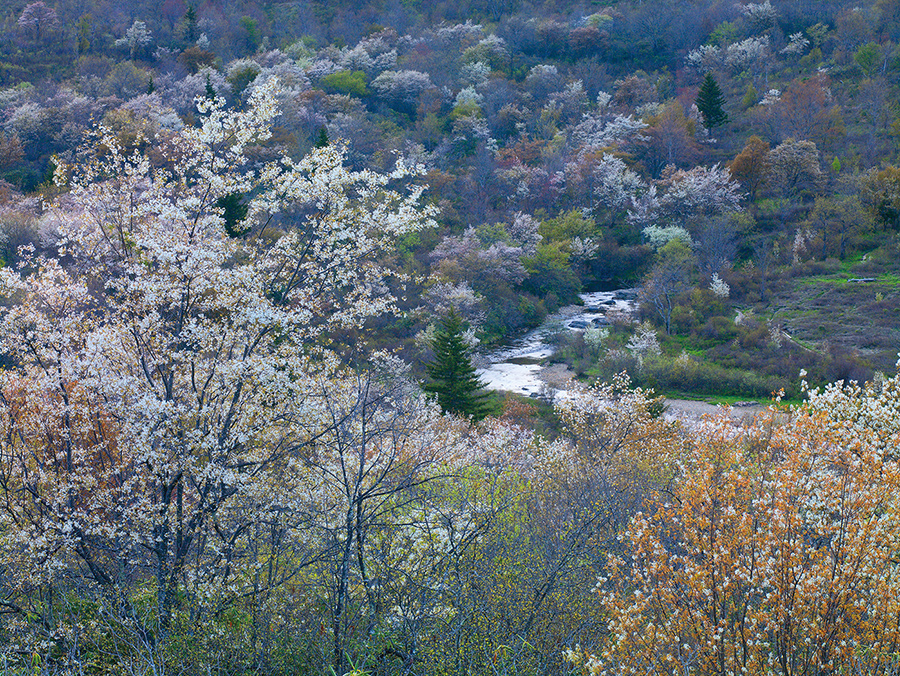 Nothing quite dresses up a forest image like fog. Sometimes the shiny reflections on the wet foliage could use toning down, as in this film image near Linville Falls. Rotate your polarizing filter while visually inspecting for intensity of effect. 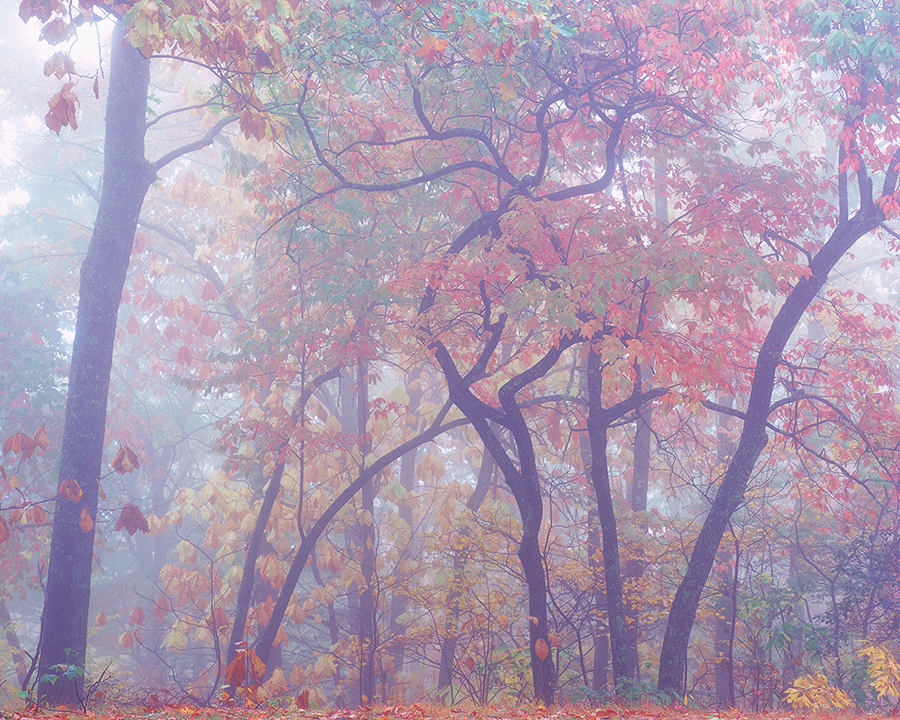 No, it’s not snow below, but the white quartzite of the Shining Rock, in Shining Rock Wilderness, NC which adjoins the Parkway. Rapidly changing skies made this a challenging situation, along with the fact that the chosen lens didn’t have enough clearance to mount a grad and still work the shutter (old school stuff). Holding the filter over the lens manually, I made several exposures and luckily placed it correctly for this “macgyvered” capture. The 5-mile walk back to the truck in a cloud layer (fog), with the moon trying to burn through, was the spookiest, most ethereal hike I have ever taken. 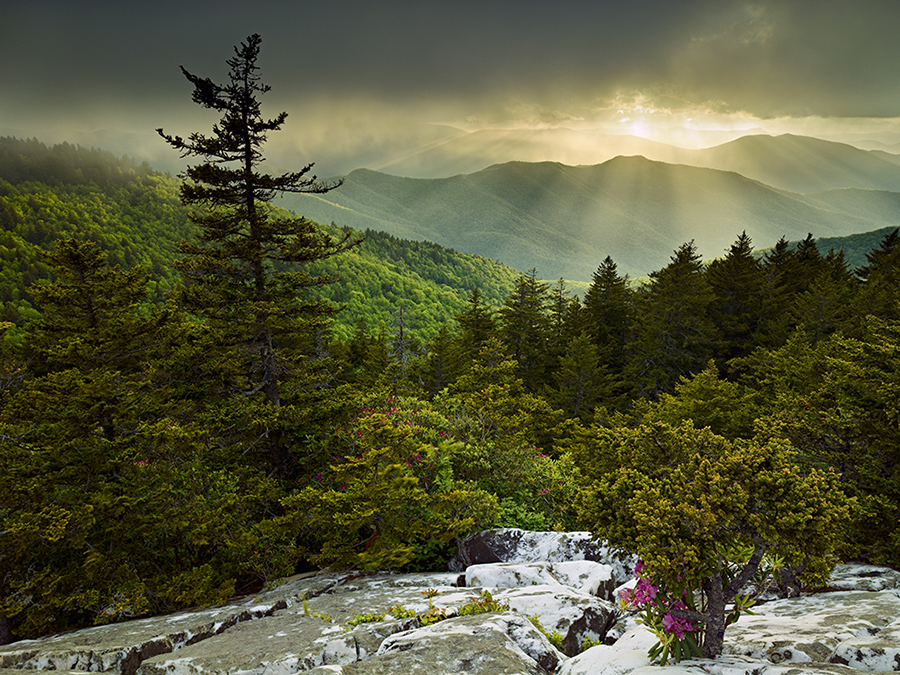 The Parkway, despite its high visitation, seems much less crowded because its 20 million or so yearly visitors are spread out over 469 miles; it just seems more peaceful than its neighboring National Parks. There are crowded spots to be sure, such as the Graveyard Fields in North Carolina and the Mabry Mill in Virginia, but early and late in the day when the light is sweetest finds fewer visitors, sometimes none at all (except for you).

Through the years and countless miles, I am continually surprised by two simple facts: the same spots give up new and different high-quality images, and places that seemed uninteresting many times suddenly give love – you just have to be there.

The Southern end of the Parkway is high country and the elevation changes allow you to find just the right “band” of color or temperature. Clouds low? It’s fog time up high. Cold and rainy down low? Snow and ice up high. Endless options, just be there.

Nye’s gallery on this site