A few years ago I was leading a workshop in Zion National Park when one of the attendees asked a question that really got me thinking. The question was “What one thing can an amateur like myself do, to get results like you?” Initially I was kind of surprised and yet upon reflection I wasn’t at all. We live in a world where we seek the quick fix, the magic ingredient, the shortcut. But on closer inspection we realize, there are no shortcuts to excellence. Not in any endeavor.

Think about the difference between what you do for a living and perhaps a sporting event that you are passionate about or play or played at a high level. The more you understand about the sport and the differences in the working professional and the advanced amateur in that particular activity, the more you realize how silly it would be to try and compete with them.

Can you imagine going one on one with Michael Jordan or LeBron James if basketball was your hobby? How about teeing it up against the best of the best on the PGA tour, or trying to race your bike against the pros in the Tour De France? We would fail miserably, wouldn’t we? In fact the better we are at a certain endeavor the more ridiculous these notions are. I guess I picked these three particular sports as I’ve had passion for all three at various points in my life and studied them a great deal as well. The fact is, they are playing a different game than we are.

With the advent of digital photography, the advancement of equipment and its availability to anyone – with the funds – to purchase full-frame sensor camera bodies, high-quality lenses, tripods and filters, etc., it becomes a lot easier for an advanced amateur with a passion for photography to get quality results. In fact, I’d say an advanced non pro can close the gap a lot more in photography than he or she can in golf, for example.

First, it’s easier and cheaper than it was in the days of film, to be sure. Few amateur enthusiasts back in the 80’s and 90’s were investing in medium or large format gear, so from a pure financial standpoint it’s much more cost effective now. Waiting a week to get your slides developed as opposed to immediately “seeing what you got” helps immeasurably as well. Years ago I actually developed a spread sheet in Excel and had a print shop make them and put them in pads so I could record exposures, so when the slides came back I could compare notes as I viewed results on the light table. Now all we have to do is look at the meta data on the back of the camera or on the computer to see how slight changes in shutter speed or aperture affected our results How cool is that?

In our workshops I’ve seen many students who have purchased carbon fiber tripods and a quality head. They have newer Nikon and Canon bodies and at least half have purchased the “good glass” as well. Yet, when I choose to shoot in the same location at the same time, they are blown away with what they see on the back of my camera, compared to what they just shot themselves. 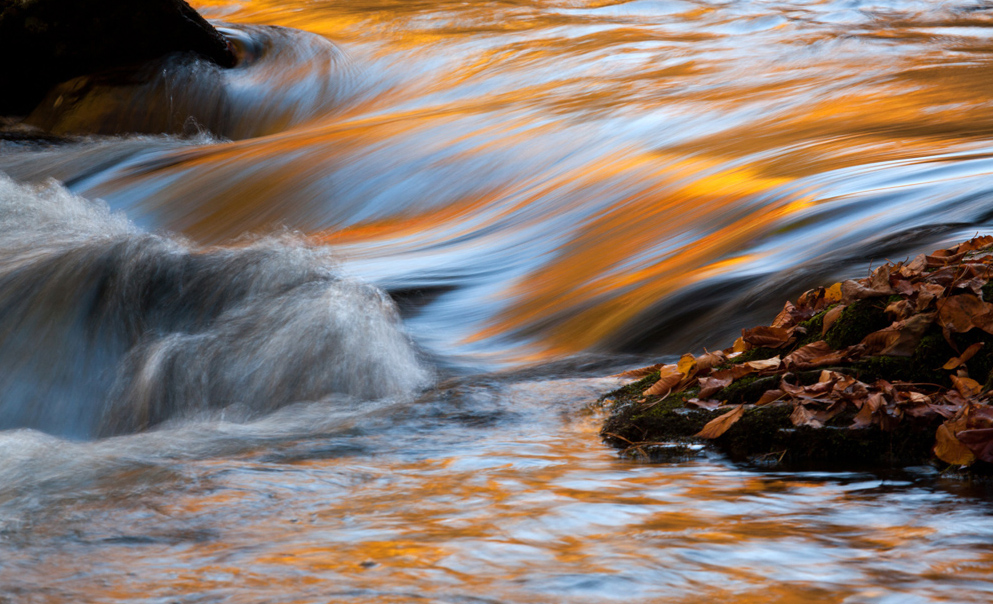 Let’s take images one and two, above. Both were shot on one of our Smoky Mountain Fall Workshops. Our student Ken shot image one and I shot image two. I did have a 100-400 mm lens where Ken had a 70-200, so I had a slight advantage, as I was able to zoom in tighter. However, the color is what wows me about image two. Ken indeed had a polarizer on his lens, but I had the LB warming polarizer from Singh-Ray. Our water “flow” looks about the same, doesn’t it? The color however is much better in version two, and that makes all the difference. I let Ken borrow my filter so he could see for himself once he got home, loaded them on his computer and viewed them on his monitor.

Moving on to numbers three and four, we see a definite difference as well. On the same workshop as in the first two images, my student Jerry shot image three with his 24-70 lens at Clingman’s Dome. I shot image four with my 24-105 lens from just a few feet away, but in the same zoom range. The difference? I had a Singh-Ray Galen Rowell 3-stop soft-edge graduated neutral density filter to help even out the exposure. This gives better detail not only in the top portion, but also helps add detail to the foreground as well. Jerry had a top-of-the-line camera, lens and tripod. He was locking up his mirror and shooting with a cable release, just like I was doing. He did everything right and had a good result. He has better results now with this Singh-Ray filter in his bag. 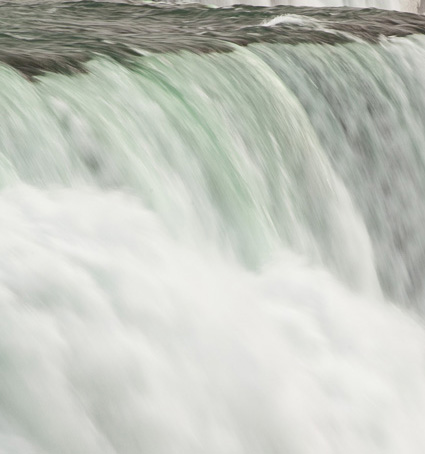 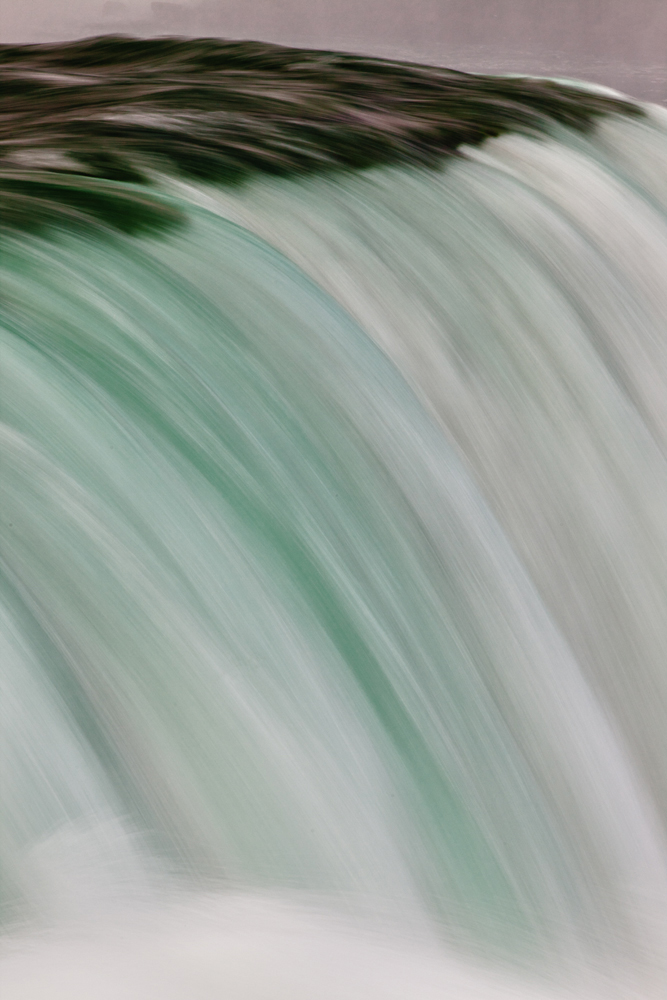 I’m responsible for the water shots in frames five and six. I went to Niagara Falls and shot for a few hours with a friend of mine. On image five I shot at ISO 50 @ f22 with my polarizer, but I could not get the water to look like I wanted it to look. My camera won’t go below ISO 50 and I did not have an aperture above f22 on that lens. So I went to my bag and brought out my Singh-Ray Variable Neutral Density Filter. After playing with it for a few test shots I was finally able to settle on an exposure that gave me 2 1/3 less stops of light coming in the lens so I could get the water to behave the way I wanted, as it does in image six. There’s no way anyone could have gotten the results image six without a valuable tool like the Vari-ND. What a weapon! I also have added one of the Singh-Ray Mor-Slo filters to give me an additional five stops of stopping power to the Vari-ND. I also use it as a standalone filter. 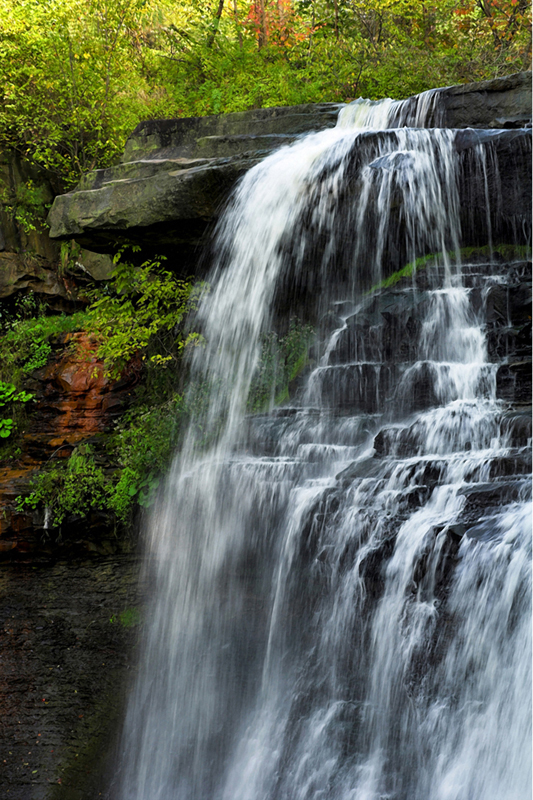 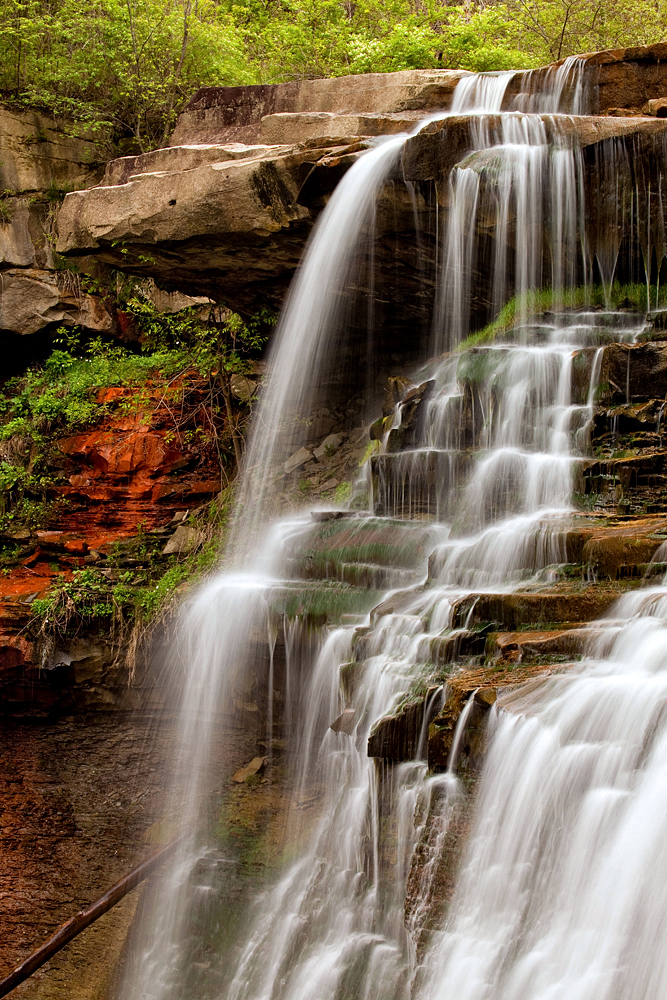 Shooting water is a blast, for sure. Shooting water with my “Singh-Ray tool belt” is the only way to do it however. I call it my tool belt because I’ll put these tools in a bag and carry them with me all the time, because when I’m shooting scenics outside, I’m going to take my tools, all of them. I took images seven and eight in Cuyahoga National Park here in Ohio one May. Both are examples of what you’ll get without and with the right tool. Even though number seven was at ISO 50 at F32, on a long lens, the simple addition of the Singh-Ray LB warming polarizer makes the water “flow” in a much more desirable way and adds some needed warmth, as well. 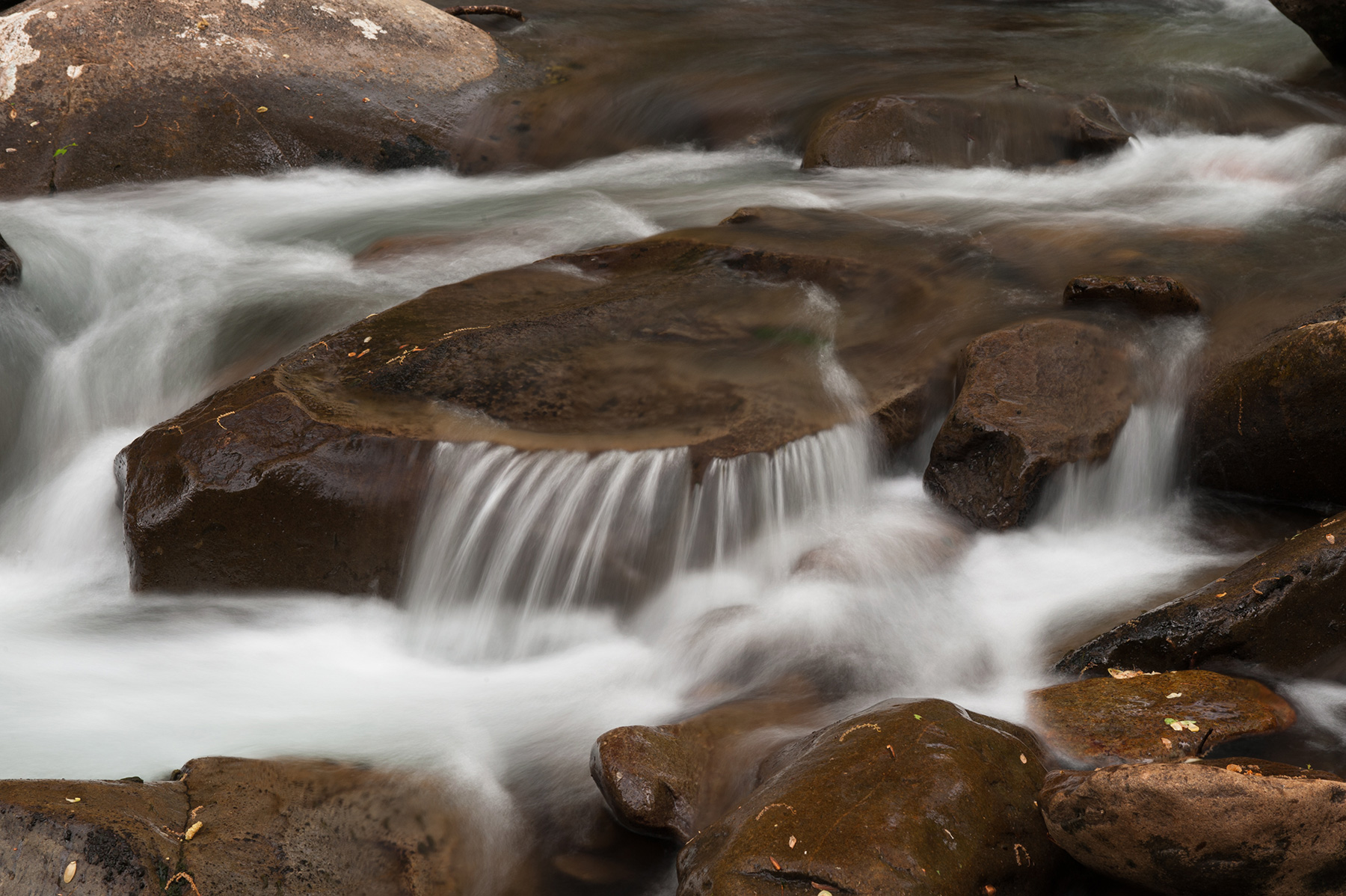 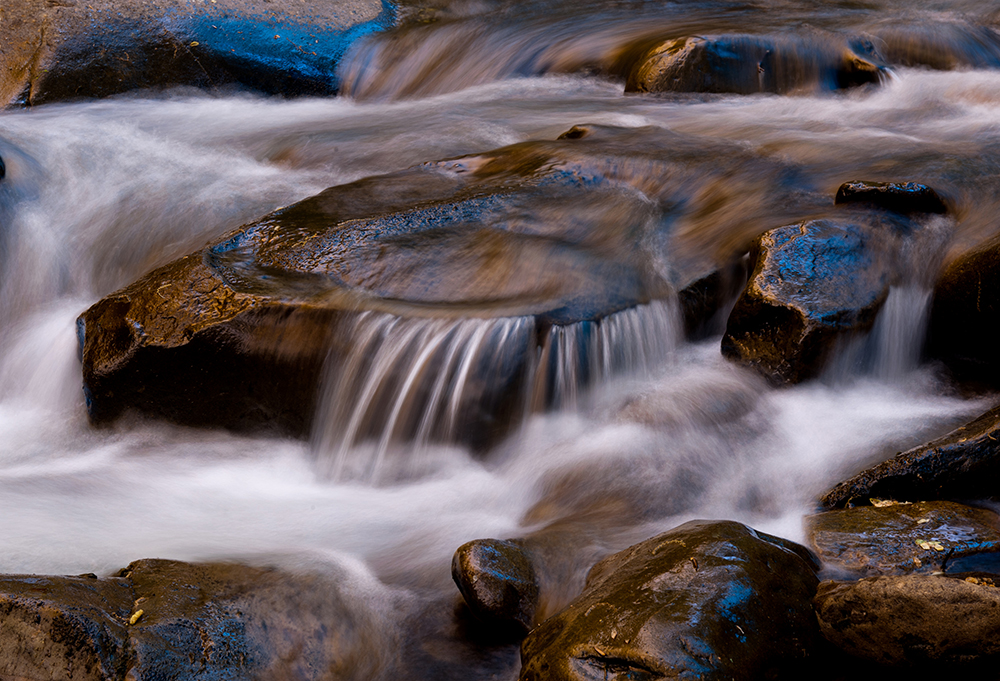 Images nine and ten were both taken by my good friend and workshop assistant Dan Messaros at one of our Smoky Mountain Spring Workshops a few years back. Dan has a great eye for a scene and found the perfect spot here. He worked it like the savvy pro he is and then loaned his Singh-Ray warming polarizer to our student Earl, so he could get the shot, too. When Earl was done, I loaned Dan my Gold-N-Blue polarizer and told him to get both a “gold and a blue image,” but to be careful with it, as a little will go a long way with this great piece of glass. Dan captured image ten, which we called “Sapphire Splendor.” There is certainly nothing wrong with image nine, but you can’t deny the extra punch the Gold-N-Blue added to an already beautiful scene.

I took the last image at one of my favorite spots in the Smokies. It was a foggy day and yet there was still plenty of light near the top of the scene. I knew I would need two of my favorite Singh-Ray filters to capture the scene properly, if I was going to end up with “Autumn Bliss.” I used a Galen Rowell 2-stop graduated ND filter and an LB warming polarizer. Mission accomplished?

The working pro in any activity will always have an edge. In our workshops we show not only what we use to achieve professional results, but also a workflow in the field designed to identify the scene that we feel has possibilities and the routine we go into to get the desired results. The routine is designed so, no matter what, when we are done shooting that area, we have exactly what we came for and more. Having the right tools to do the job properly is what helps set our work apart from others and Singh-Ray’s high quality, high-performance filters are a big part of that.

Darrell and Dan will be teaching in the Great Smoky Mountains April 19-23rd. Full details can be found at www.masterthelandscape.com

Darrell’s pro gallery on this site